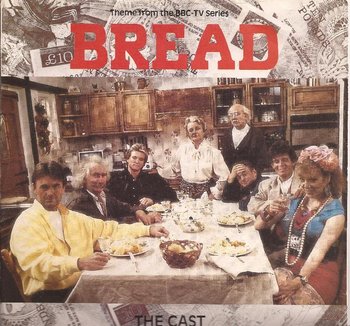 Bread was a Brit Com that ran from 1986 to 1991. It was about the working class Boswell family of Liverpool: Apron Matron Nellie, and her children Joey, Jack, Adrian, Aveline and Billy. The title refers to Cockney rhyming slang for money (bread and honey = money) and was about attempting to keep the family financially afloat in Thatcher's Britain.

A BBC publicity photo of the show's cast on board the Mersey ferry was captioned Bread Cast upon the Water.