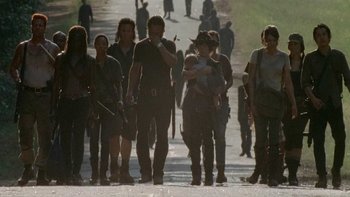 "If you smell something sizzling, could be me!"

Maggie, Sasha and Daryl struggle with their recent losses as the demoralized, starving group pushes on across the desert to find sanctuary.

The group's spirit is at an all-time low, as they grieve their recent losses. Worse still, they are out of food, water, and fuel, and now forced to walk on foot, they are now fatigued, dehydrated, and more downtrodden than ever. In this drought, Sasha fails to find water, Daryl only finds a worm to eat, and Maggie is near catatonic. Carl gives Maggie a broken music box as a tribute to Beth, and Gabriel tries to console Maggie. The preacher is harshly rejected by Maggie, citing him letting his congregation die to save himself.

The group slowly trudges forward, tailed by a growing number of walkers. Rick refuses to engage them in their fatigued state, opting to wait until the terrain can be used against the walkers. Sasha is eager to take on the herd, and Michonne's attempts to warn her to not become impulsive like Tyreese was after Karen's death fall on deaf ears.

Once they reach a bridge, Rick has a few of the group push the walkers over the bridge's steep hill to get rid of them, rather than waste further ammo or energy. Sasha, eager to take out her frustration the walkers, breaks ranks and forces the group to engage the walkers in close-quarters combat. Sasha actually slashes Abraham with her knife in a frenzy, and Rick is nearly bitten before Daryl and Carol save him. Michonne scolds Sasha for her rashness, and Abraham later tells Sasha that she'll only cause more problems if she doesn't get her act together.

Abraham starts drinking some booze, and though it's pointed out he'll only worsen his dehydration and state, Eugene says he has no idea how things could get worse. Right on cue, a pack of wild dogs confronts the startled group, but Sasha quickly guns them down. The group ends up eating the dogs, though when Noah refuses to eat, Sasha tells Noah he won't survive. A broken Gabriel tosses his cleric's collar into the fire as Maggie looks on.

Glenn asks Maggie to talk to him, and finally, Maggie opens up to her husband about her trauma: after Hershel died, it broke her so badly that she believed Beth was dead as well. Learning she was alive and then that she wasn't in the same day hurt her, and she admits that she used to think they were living in "the bad part", but now isn't sure if she wants to go on. Glenn assures her that she does, and finally gets her to take a drink.

Daryl breaks off from the group to try to hunt, and comes across an abandoned barn. He starts smoking a cigarette, but when he burns his own hand with it, despairs over how he can't feel anything — and finally, after weeks, breaks down and cries it out. When he returns to the group, he finds them spooked, as they've found a bunch of water bottles with a note saying they're "from a friend". After all they've been through, the group refuses to drink the water, presuming it to be a trap, and move on. Miraculously, it begins raining, to the group's joy, and Gabriel apologizes to God for doubting Him. Unfortunately, the rain storm quickly develops into a thunderstorm, and Daryl leads the group into the barn he found.

After settling in for the night, Rick tells a story of his grandfather, a World War II veteran who told himself every morning he was already dead, and eventually, this mentality paid off, and he made it home safe and sound. Rick tells the group that they have to do the same if they want to live, and tell themselves that they are the walking dead. The speech works in a different way for Daryl, who refuses the notion that they're dead, and restores some of the fight in him.

Not long after, Daryl looks outside the barn into the stormy night to see a large herd of walkers heading their way. Daryl desperately tries to hold the door, and is joined by Sasha and Maggie. The rest of the group sees this scene, and every member, great and small, throws their weight against the door together as the storm intensifies and the walkers push harder...

The next morning, Maggie wakes up to find that Daryl has repaired the music box. The two reflect on Tyreese, noting that he was tough - and Daryl notes that so was Beth. Maggie wakes up Sasha and asks her to come with her outside. They find the aftermath of the storm - revealed to be tornadic in nature - is a great mess of uprooted trees and impaled or killed walkers.

The two watch the sunrise. Sasha admits that she feels like she could be dead soon, but Maggie assures her that they'll make it. Maggie then tries to play the music box to no effect. Suddenly, they are interrupted by the arrival of a clean, well-dressed man, who identifies himself as Aaron and asks to speak with Rick. As they draw their guns and look at him in shock, the music box suddenly begins to play...