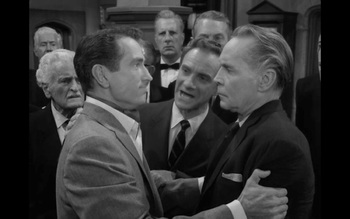 Cat got your tongue?
Rod Serling: The note that this man is carrying across a club room is in the form of a proposed wager, but it's the kind of wager that comes without precedent. It stands alone in the annals of bet-making as the strangest game of chance ever offered by one man to another. In just a moment we'll see the terms of the wager and what young Mr. Tennyson does about it, and in the process we'll witness all parties spin a wheel of chance, in a very bizarre casino called The Twilight Zone.
Advertisement:

This episode is based on "The Bet" by Anton Chekhov.

Old man Colonel Archie Taylor is a prominent member of a gentleman's club. The chatter proceeds as normal, but one member's chatter bothers him: that of young, nouveau riche Jamie Tennyson. He's a new member, and he's mouthy and "poorly bred" in Taylor's opinion. To get rid of Tennyson, and because he knows Tennyson has squandered his recent wealth and is desperate for money, Archie offers a wager despite gambling being illegal in their state.

He promises Tennyson $500,000 if he can keep from saying a word for an entire year. Not only will Tennyson have to not speak for a year, but he'll have to consent to being in a locked glass suite riddled with microphones so they can catch him if he talks, even a word, to himself, at any time when no one's watching - but people will be watching. He is allowed to communicate only through gestures and writing. Tennyson is offended, both at the conditions of the wager and the fact that the Colonel has just aired all his dirty laundry to the whole club! He asks questions of the Colonel, before agreeing. He finally says he needs a check on deposit in Jamie's name, but the Colonel takes umbrage at what seems like impugning his honor and his word, and the rest of the club backs him up because he's a longstanding member. Jamie subsides, accepting "my courage against your credit", and shows up the following night to begin his mute year. Archie's friend in the club, Alfred, seems to think this whole thing is a bad idea and says so.

Weeks pass, and Colonel Taylor is astonished that Tennyson has made it so far without speaking a word, but remains confident that he will win the bet. The young man is well cared for, but Archie is astonished that a young man with a beautiful wife isn't bored. Months pass and pass, and by the time nine months of the year have passed, Archie is visibly on edge. He approaches Jamie and offers him $1,000 to walk out that very day, having proved he can keep quiet for a long time. Jamie angrily marches over to the calendar, taps it, and writes out his reply to the Colonel: "Three months to go! The Bet stands!" Alfred warns Taylor again that his bet is a bad idea and asks if he has the money to make good if Jamie does succeed in holding up his end of the wager. Alfred walks away saying he hopes Archie really does have the money.

Taylor decides to fight dirty. Though Jamie has sent multiple requests for his beautiful young wife to visit, she never has. Taylor begins tormenting Jamie with gossip about her: she's been seen around town with moneyed young men who drive around in flashy sportscars. Jamie is visibly hurt and tormented by hearing these things, but he still never says a word. Taylor turns the screws, repeating every nasty word of gossip, calmly tormenting Tennyson with the knowledge that his wife is stepping out on him and doesn't seem to care who knows. Taylor tries again to offer Jamie an out to the bet in the form of $5,000, then raises to $6,000. Jamie doesn't see the actual cash and refuses, certain he's being scammed.

Finally the year has passed, and Jamie has won the bet! He comes out of his glass prison, and approaches the Colonel with his hand out for the promised $500,000. Archie, caught on the back foot, must now make an admission of "distasteful candor": that he is himself also without a fortune, which he lost a decade ago. He even admits that the counter-offers were more than he could afford. He praises Tennyson for his resolve and says he'll resign from the club.

With all the membership watching, a tearful Jamie Tennyson pulls out his pad and begins to write. The men of the club are boggled. His year is over, he can speak if he wants, why doesn't he?!

"I knew that I would not be able to keep my part of the bargain, so one year ago I had the nerves to my vocal cords severed!"

Jamie tears off his cravat, revealing a surgical scar which he's kept hidden under scarves and turtlenecks the whole time, causing the members of the club, Taylor especially, to react with shock and horror.

Rod Serling: Mr. Jamie Tennyson, who almost won a bet, but who discovered somewhat belatedly that gambling can be a most unproductive pursuit, even with loaded dice, marked cards, or, as in his case, some severed vocal cords. For somewhere beyond him, a wheel was turned, and his number came up black 13. If you don't believe it, ask the croupier, the very special one who handles roulette - in The Twilight Zone.