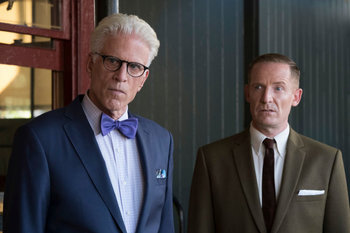 "Hello, imbeciles."
"Let's tear this mother to the GROUND!"
— Michael

Shawn congratulates Michael on the success of his experiment and promotes him. Michael "reveals" to Chidi, Eleanor, Tahani, and Jason that they're in the Bad Place, and Shawn informs them that the neighborhood will be shut down and the humans themselves tortured. Dismayed, the four ponder their next course of action, but Eleanor insists that Michael is still on their side, based on his namedropping Kierkegaard, who was known for the "leap to faith". Michael calls a neighborhood assembly to roast the humans before the demons trash the neighborhood in a drunken rave.

The next morning, Vicky is about to tell Shawn about the reboots before Michael points out that the humans are escaping on a train and gets Vicky implicated for the deed. A second train leaves carrying Shawn and the rest of the demons, revealing the four humans and Janet on the tracks. Eleanor explains that they pieced together Michael's message — to use Derek to drive an empty train to the Medium Place at the end of the party and hide under the tracks to avoid detection — from clues in the roast. With the demons gone, the team realizes they're free to make a break for the Good Place.