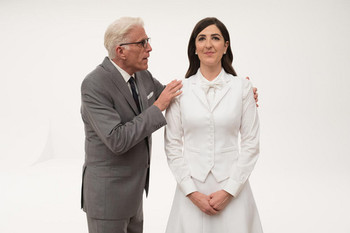 "They keep their Janets in a neutral pocket dimension beneath the shapeless time void. It's right next to Accounting."
"That's the good news. The bad news is, I seem to be losing my ability to sustain object permanence. So it's sort of a glass half full, glass stops existing in time and space kind of deal."
— Janet
Advertisement:

Before he began creating his experiment, it's revealed Michael stole Janet from a warehouse in between the Good and Bad Places. He claimed to be a Good Place architect when he activated her and they built the neighborhood together. Now, Michael has to figure out why Janet is glitching out, as the problem could get bad enough to threaten the stability of the neighborhood. Michael troubleshoots Janet while Vicky is distracted by torturing Chidi with needles. Janet's manual suggests the glitches are being caused by Janet lying. Initially, Michael blames himself for lying about the neighborhood's nature, but when a very bad glitching attack occurs while he and Janet talk to Tahani and Jason about their relationship, he realizes the problem is Janet's own subconscious lies - she isn't really happy for the couple because she retains her second incarnation's love for Jason. Janet advises Michael to activate her self-destruct mechanism; he makes excuses and ultimately refuses because Janet is his friend. Instead, they solicit Eleanor's advice. Eleanor successfully talks Janet through processing her newly acquired human emotions. Acting on Eleanor's recommendation of a rebound relationship, Janet creates a boyfriend for herself, Derek, who has no knowledge of anything and has an infantile state of mind.