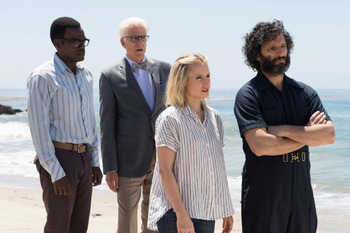 "Derek?"
"There is something called the Doctrine of Double Effect. In order to remain ethical, you can't just go into this with the intention of killing Derek. Your only goal has to be to spare Jason and Tahani from future pain by filling them in on Jason's past."
— Chidi

Eleanor has repeatedly viewed the tape Mindy recorded of her and Chidi together confessing their love for each other, a secret she's kept from Chidi. Michael wants to kill Janet's newly-created "rebound boyfriend" Derek to prevent him from blowing their cover while Janet grows increasingly depressed and Chidi warns that this is unethical and their goal has to be helping Jason and Tahani, which Michael and Eleanor agree to. As Tahani and Jason decide to get married, Eleanor, Chidi, and Michael stop the wedding and cause Derek and Jason to get mad at each other. Eleanor realizes that Janet's feelings for Jason run deeper than she'd previously thought and advises that Janet sort through this by talking about her heartbreak. Janet reabsorbs Derek's essence and puts him in a casket to dispose of in her void. Tahani and Jason discuss their future and realize they've been rushing things. Eleanor shows Chidi the tape, and each is astounded that they loved the other and said it with so much certainty. Michael asks Eleanor's advice on being ethical, to which Eleanor replies that he's becoming human. Michael returns to his office to find Shawn waiting for him.