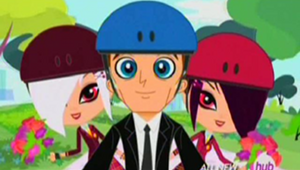 A postal worker comes into the Littlest Pet Shop with passes to a ballet recital for Blythe and an animal DNA testing kit for Mrs. Twombly for verifying breeds. Overhearing the discussion between Blythe and Mrs. Twombly, Zoe assures Minka that Zoe is totally purebred. As Blythe jumps for joy at her passes, Roger steps into the store to regretfully inform the two that he has been temporarily laid off from his job as an airplane pilot.

Without much to do, Roger spends his time re-organizing the pet shop, fixing the furniture, and installing an expresso machine. Mrs. Twombly inquires about the reasons for the layoff, and Roger explains that the union randomly lays people off, Roger having been put on the proverbial chopping block. As Roger leaves, the espresso machine shorts and explodes, tempting Blythe and Mrs. Twombly to find ways to get Roger somewhere else. Mrs. Twombly leaves the front and goes to the day camp to try out the DNA test on one of the regulars. Pepper, Vinnie, Sunil, and Penny run away, fearing tests, leaving Zoe and Minka.

As Roger tries to make out the bundle of cords behind Mrs. Twombly's computer, he decides to yank them all off instead. Blythe steps in and suggests to Roger an online job search to see if there are any openings for someone like him somewhere nearby. Roger, looking back at the non-functioning computer, decides to use the one back home. Blythe runs off to head for school, leaving Roger alone and depressed.

Mrs. Twombly conducts the DNA testing on Minka and Zoe. This entails putting a cotton swab in the pets' mouths, putting the swabs together in a centrifuge, and waiting for the results. As Zoe waits, she wonders how her lineage must have been like, putting clones of herself in the presence of various historical figures. The DNA test finishes, the other pets having gathered back in the room. Mrs. Twombly reads the printout stating that Minka is a rare breed of monkey known as a "minkey" while Zoe is actually a mixed breed. Minka is too dizzy to pay attention but gets the idea, but Zoe, upon hearing the news, falls to the floor.

Roger spends some time going through listings of totally unrelated openings until he finds one he likes. He immediately calls the number on the screen. When Blythe returns home from school, she sees Roger putting on a business suit. When Roger tells her that he's heading to see a potential employer, Blythe marvels at how quickly he pulled it off.

With news that Minka is a rare minkey, the other pets wait on her hand and foot, not allowing her to do anything lest she hurt herself, so she just takes to watching TV. Meanwhile, Zoe musses up her hair and dresses in plain clothes. Blythe comes down the dumbwaiter and, once again, wonders what's going on. Vinnie lets Blythe in on the DNA test results, but before she can say anything of value, she hears incessant honking from outside. Blythe goes over and sees the Biskit Twins in their limousine. They both splash their drinks at Blythe's feet, the stickiness holding Blythe in place so they can taunt Blythe. When they're done, Brittany calls on their driver to clean her up. The driver gets out of the limousine to reveal himself as Roger. Roger, now the twins' personal assistant, gets Blythe out of the puddle by soaking up the orange drink with his necktie and scrambles back into the limo to take the twins to the mall, leaving a dumbfounded Blythe on the sidewalk.

Along the way, Whittany asks Roger to turn on the radio, and Roger uses it as an excuse to play his own choice of music loudly. He takes every opportunity to lend the Biskit Twins a helping hand and never grows dismayed by their selfish actions. Eventually, the twins decide to try doing good deeds too and helping Roger out, which they start enjoying. They go back to the mansion and play a board game together, where they learn to laugh and have fun. After the game finishes, Roger has to wrap up and leave, as his shift is over and he has to return home for Blythe. They beg of him to stay, so he hangs around for longer. However, LeGrande steps into the room with Blythe, LeGrande astonished to hear laughter. Seeing Blythe, the twins revert to their usual behavior and try to shoo her away. Blythe, meanwhile, reminds Roger about going to watch the ballet together and pulls out a used dress she obtained at the thrift store, so the twins fabricate a "Russian ballet" as an attempt to keep Roger to themselves, even offering Roger to fly them on their private jet. Taking an opportunity to be able to pilot a plane again, Roger dashes off with the Biskit Twins, leaving Blythe by herself in tears.

Back at the Littlest Pet Shop, Minka grows increasingly unnerved by five pets staring at her all the time and by Zoe being quiet and staying in one place. Minka tries to encourage Zoe to at least sing again, but she coughs up a hairball instead. Not deterred, Minka advises Zoe to embrace her status as a mutt and be the best mutt she can be, and in turn, Zoe asks Minka to promise to be the best minkey possible. To that end, Zoe takes the role of a sassy-talking Brooklynite and Minka a demanding queen. The two of them prove such an annoyance that they get second thoughts about their behavior.

On their way to the twin's private jet, the Biskit Twins start snickering to each other about how Blythe buys used dresses that most likely previously belonged to them. They continue to make fun of Blythe, and while Roger tries to talk them out of it, they refuse to stop. This behavior offends Roger so much that he turns the limo around. The twins' father, Fisher, sees Roger returning them to the mansion and requests for Roger to take him to a location near the apartment building where he and Blythe live. When Roger tells Fisher what happened, Fisher informs Roger that he sold off his private jet, indicating that the twins were lying. When Fisher finds out that Roger wanted to take his daughter to a ballet performance in town, Fisher encourages him to speed it up.

Mrs. Twombly re-reads the test results and finds out that she mixed up the two: Minka is actually a common breed whereas Zoe is the purest among purebreds. When Minka and Zoe learn this new information, their personalities (and the day camp) go back to normal. Roger steps into the Littlest Pet Shop to announce that not only is he going to the ballet with Blythe, he received his job as a pilot back. Mrs. Twombly takes this as being able to unlock the power tools again.