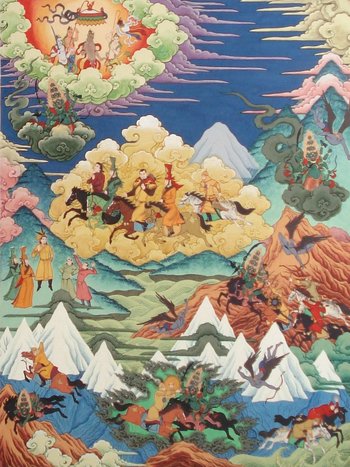 The cosmology of Turkic and Altaic people.

The plains and steppes of Inner Asia are home to plenty of nomadic tribes. While the Mongols have become more (in)famous historically as fierce conquering barbarian hordes with the help of Genghis Khan, these people like everyone else also have their own religion and culture. This page deals with the mythology of the Altaic people which also includes the Bulgars, Huns, Siberians and Turks. Worth knowing is that originally the belief practice consisted of totemism, animism, shamanism and ancestor worship, however eventually it incorporated elements from other religions as well such as Taoism, Shintoism, Buddhism, Hinduism, Islam and even Judeo-Christianity. Go also check out the pages of the Chinese, Japanese and Koreans to find out more interesting information about the religions and mythologies of the other Far East Asian civilizations.