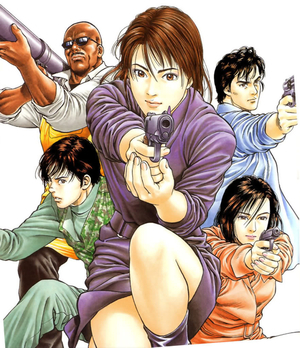 Angel Heart is a seinen manga series by Tsukasa Hojo that ran from 2001 throughout 2017, initially serialized in Weekly Comic Bunch up until 2010, when it moved to Monthly Comic Zenon and continued under the title of Angel Heart: 2nd Season for the rest of its run. It was adapted into a 50-episode anime series during 2005 through 2006. The series is an alternate history of City Hunternote It was originally a Sequel Series before fan backlash to killing off Kaoru led to it being declared an Alternate Continuity, in which Kaori dies in a car accident and her heart is transplanted into the heroine of this series, a professional assassin who killed herself. Brought back to life with Kaori's heart, "Glass Heart" soon discovers she has Kaori's memories as well. She escapes the organization that trained her and goes in search of Kaori's life, including Chivalrous Pervert Ryo Saeba (the hero of City Hunter).

After the inevitable problems are resolved, Ryo Saeba becomes the former assassin's informal adoptive father (she's only fifteen at the story's beginning) and she takes the name "Xiang-Ying". Soon, she's assisting him in the cases he takes on as a private detective and vigilante, as Kaori did, although in a rather more active role because of her training.

No relation to the 1987 horror movie of the same name

This series displays examples of: