Film / Birth of the Tenth! Gather All Kamen Riders!!
aka: Kamen Rider ZX 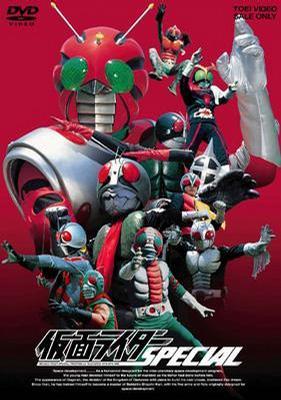 After the end of Kamen Rider Super-1, the Kamen Rider Series went on another hiatus. But fans still campaigned for a new series, so Shotaro Ishinomori introduced a new Kamen Rider—without a TV show.

A "tenth Rider" debuted on July 1982, in an illustration published by such Japanese magazines as TV Magazine and TV Land. After a year-long multimedia campaignnote including a contest to decide his name, a radio drama on All-Night Nippon starring Akira Kamiya as the tenth Rider, a live unveiling of the character and his name, several photo stories in magazines and even live stage shows, Kamen Rider ZX finally made his TV debut in the hour-long special Birth of the Tenth! Gather All Kamen Riders!!.

Ryo Murasame, captured by the Badan Empire in the Amazonian rainforest with his sister Shizuka, is remodeled into their own Super Soldier, ZX, while Shizuka is killed just as soon. Initially Brainwashed and Crazy, Ryo miraculously recovers and escapes. He eventually meets three strangers revealed to be V3, Riderman and Super-1, who personally introduce him to the other Kamen Riders and join him in his fight against Badan.

The manga Kamen Rider SPIRITS is an alternate take on the ZX story. The crossover film Heisei Rider vs. Showa Rider: Kamen Rider Taisen feat. Super Sentai (released on the 30th anniversary year of ZX) puts a large focus on ZX, with the return of both Ryo and the Badan Empire.