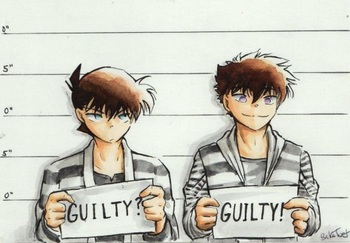 "And how do the defendants plead?"
(Illus. by Bakathief

When everything goes wrong on what seems like a routine heist, the Moonlight Magician finds himself exposed, and thrown behind bars without so much as a lockpick to his name. But is that going to stop him from launching the Great Escape of the century? Of course not. Especially when he finds himself cellmates with the country's other most notorious criminal...

is a long, twisty fanfiction by MintChocolateLeaves

, bringing the worlds of Magic Kaito and Detective Conan together on a Conspiracy Thriller running from Tokyo's lowest gutters to its highest echelons of power. Currently ongoing, it's slated to run for fifty-two chapters divided into four arcs of uneven length:

Cost of Freedom provides examples of: