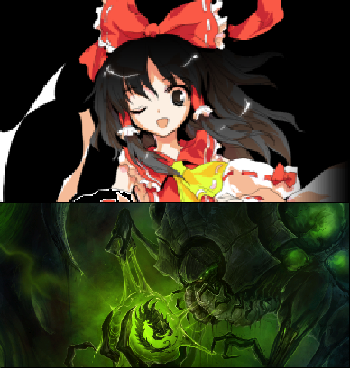 If these two are teaming up, we might have to hide.
"It's a portal. It leads to a marvelous place, filled with fantastic creatures. Creatures that shape reality to their very will. Creatures that constantly fight and improve their tactics. Humanoid creatures. This place is called... Gensokyo."
— Sarah Kerrigan

is a Touhou and StarCraft crossover fanfic written by Antagonist Chan. The premise is that Abathur, the Evolution Master of the Swarm, comes to Gensokyo with a small army of Zerg to gather Youkai essence for use in the Swarm, but Gensokyo assimilates them, instead.

The story revolves around four focus characters (Abathur, Aya Shameimaru, Alice Margatroid (starting in chapter 11; prior to this, her role was taken by Cirno), and Reimu Hakurei) as Abathur tries to collect essence and evolve the Swarm, while the other three help him get used to Gensokyo, and the strange effects it has on Zerg biology and psychology. Like the two series' that it is based on, the series has a hell of a lot more characters than that. It also likes to avoid Flanderization, making Cirno rather bright and Meiling a competent gate guard, for example.

The fanfic, Gensokyo's Heart contains examples of the following tropes: