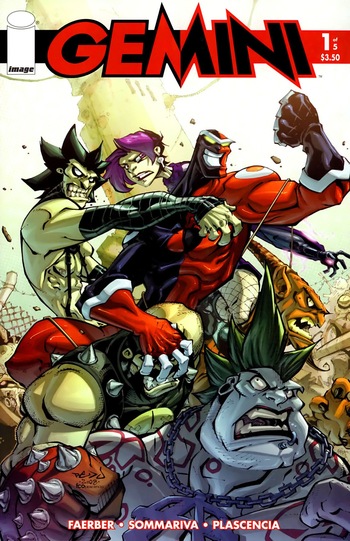 Dan Johnson is just a normal guy with a normal job... or so he thinks. What he doesn't know is that a secret organization called The Constellation is using him as their weapon against crime. Armed with enhanced strength and reflexes, Gemini is a superhero with an identity so secret, even he doesn't know it.

Although he keeps the streets safe, the whole operation is an ethical nightmare, as Dan's life is effectively controlled for him, and he is unknowingly thrust into mortal danger. When Gemini's old handler, a woman named Regan, decides to do something about it, things change very quickly.

Gemini is a five issue mini-series written by Jae Faerber, illustrated by Jon Sommariva, and published by Image Comics. The story takes place in the same slice of the Image universe that all of Faerber's superhero works occupy.