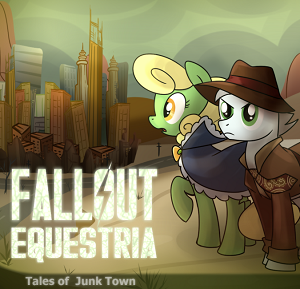 Prodigious Peddler is a Trader out in the Equestrian Wasteland, as he travels he meets various troubles and tribulations, until he's propositioned by a strange mare in a cloak by the name of Sun Beam while trading in town. The two of them travel from place to place, both finding that neither is quite what they seem and they have pasts coming to quickly catch up with them.

A spin-off of the popular Fallout: Equestria fanfiction Tales of a Junk Town Pony Peddler is an Audio Play similar to Doctor Whooves Adventures, and made by the same fan studio, Pony In A Box Productions. The series started in April of 2013 with a one-shot story, Once in a Blue Moon, in which we met the titular character, Prodigious Peddler. Due to a high fan response it was expanded and continued, managing about an episode every two to three weeks. Each episode is named and themed around a Fallout-Era song, though occasionally it stretches those limitations and uses songs from the 70's. The series seems to take place sometime towards the end of the original story. It takes pages from the book of Cowboy Bebop with musical themes and styles changing per episode, with a heavy focus on sugary sweet 60's era jams and a healthy mix of rock.

The series has so far had twelve episodes and is currently ongoing. All episodes can be found on youtube