Getting Crap Past the Radar cleanup

Give a detailed reason, too.

"For a successful technology, reality must take precedence over public relations, for Nature cannot be fooled." - Richard Feynman
shoboni

Done, now what about Futurama?

Okay, so shows that are aimed at kids but have the same rating as The Simpsons (TV-PG) such as Total Drama and Regular Show? I've noticed such pages written as if their shows were rated TV-Y or TV-Y7. Obviously there's going to be some mature humor in these shows since they have the PG rating. Should these pages even exist, and if so, what would be a good starting point against which to measure stuff that should have gotten it a TV-14 rating or higher?

Also, what's the verdict on "OMG they said a word that could be considered a swear word under the loosest definition!" type things in general, like saying "crap" or "suck"? I really don't think these belong on the TV-PG or higher pages, but what about lower ratings? TV-Y?

Those are not Radar. If every show gets away with them, then they are not subject to censorship, ergo there is no Radar to pass.

I would honestly say the PG rating is a sign that they DIDN'T get away with it.

Candi Sorcerer in training from Closer to rimward than hubward Relationship Status: They can't hide forever. We've got satellites.

The rating system and/or targeted audience gives the range of radar that needs to be gotten past. One of the reasons the "Birds of Prey" song from Batman: The Brave and the Bold is such a whopper of an example is it's a definite marketed-to-a-specific-demographic kids' show with a song that has some definite innuendo in wording and animation that is not in any way the kind of thing that rating should have let through. (The radar probably shut down in self-defense.)

On the other hand, the words 'crap' or 'darn' on a show with The Simpsons' rating don't qualify because a lot of shows from different companies in that rating range allow that.

There's also that TV Shows specifically (and maybe some book series) are assigned a rating, and then are (generally) expected to stay in that rating. Which means a very precise radar involved once that rating is set.

Of course, there's also Disney's particular radar. If they or another company don't allow particular things in its media products, period, that's another level of radar that has to be gotten through before the rating and audience radar is even met.

Coming back to where you started is not the same as never leaving. -Terry Pratchett
shoboni

Speaking of that, how do we handle books considering most countries don't have a ratings board for lit?

The standards of the publisher would be my first to-look-at, there.

"For a successful technology, reality must take precedence over public relations, for Nature cannot be fooled." - Richard Feynman
Candi Sorcerer in training from Closer to rimward than hubward Relationship Status: They can't hide forever. We've got satellites.

After the publisher, I'd look at the official target audience. (Pulls examples out of thin air.) I'd expect the radar to be much more intense for The Babysitters' Club then for The Kadinnote Beatrice Small. Historical romance fiction. Doesn't have a page.

Coming back to where you started is not the same as never leaving. -Terry Pratchett
Fighteer Lost in Space from The Time Vortex Relationship Status: Dancing with Captain Jack Harkness

"It's Occam's Shuriken! If the answer is elusive, never rule out ninjas!"
Sterok Relationship Status: Showing feelings of an almost human nature

Winx Club has a really bad page. It's an Italian kids cartoon, but the stuff is still pretty tame. I'm not sure what to do though.

Your preferences are not everyone else's preferences.
Fighteer Lost in Space from The Time Vortex Relationship Status: Dancing with Captain Jack Harkness

If the examples are very poor, then delete them, with a note to see this thread.

I was wondering if this is graphic enough to count(it is a all ages comic):

That seems like Toilet Humor to me, but is it really something a Radar would catch?

"For a successful technology, reality must take precedence over public relations, for Nature cannot be fooled." - Richard Feynman
Fighteer Lost in Space from The Time Vortex Relationship Status: Dancing with Captain Jack Harkness

We were discussing the example in Ask The Tropers — a nasty bruise like that is certainly not Radar material, but it might qualify as Family-Unfriendly Violence if MLP doesn't typically show injuries of that nature.

It's also not nearly graphic enough to qualify for Eye Scream.

"It's Occam's Shuriken! If the answer is elusive, never rule out ninjas!"
treelo

Nohbody "In distress", my ass. from Somewhere in Dixie Relationship Status: Mu

I don't see how that's Eye Scream, either. A blackened eye doesn't count for ES any more than it does GCPtR.

All your safe space are belong to Trump
shoboni

It's more implication, if you look at the rest of the comic that eye pretty screwed, she can't even open it all the way anymore(and think there's a little trickle of Black Blood there). I think it's actually been disfigured somehow.

Anyway, what do we want to do with the pages for things like Futurama and the Simpsons?

Since Simspsons is only PG should we make sure there's nothing acceptable on it's page first? 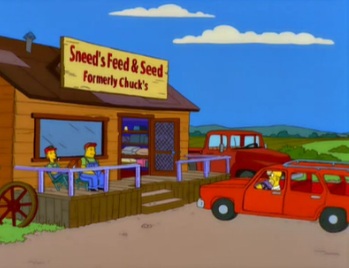 You might be wondering why a show like The Simpsons would have a Getting Crap Past the Radar page, seeing as how it's not supposed to be for kids in the first place note despite that when The Simpsons first became a 30-minute animated sitcom, a lot of Moral Guardians protested against Bart's subversive behavior and condemned the show as trash because people were still accustomed to thinking that cartoons were for children — despite that there were adult cartoons prior to The Simpsons, such as The Flintstones, Wait Till Your Father Gets Home, and Fritz the Cat, bright colors and crude, childlike character designs nonwithstanding.

Thing is, it's still subtle enough about its dirtiest, most subversive moments that some consider it still acceptable enough at least for older kids, since even kids who realize that it's a dirty show probably don't realize just how dirty it is.

—>Sideshow Bob (as he's accepting his Daytime Emmy award): This is one more award than you'll ever win, you blithering jack-in-the-box. —>Krusty: Just don't drop that thing in the shower, Bob! —> Ned Flanders as Priam: When people get new wood, they'll think of Trojans! —>Myers: "In reply to your specific concerns about the cartoon, it's been shown that no one crackpot can change the world on their own, so let me conclude by saying..." —>Marge: "...and the horse I rode in on?!?!?" —>Smithers: I think women and seamen don't mix. —>Mr. Burns: We all know what you think. —> Lisa: Well, maybe if Mom didn't make such dry waffles. There, I said it. —> Marge: Well, maybe if you'd eat some meat you'd have a natural lubricant. —>Katy: Oh, uh, that's not my bellybutton. (beat): But I didn't say stop! —> Rude: Question two: How long is your wiener, seriously? —> Burns: Great heavens! What kind of radiola show is this? —> Rude: How about this — when was your first gay experience? —> Burns: Oh, well, when I was six, my father took me on a picnic. That was a gay old time! Oh-ho, I ate my share of wieners that day. —> Rude: Oh that sounds lovely. [coughs "queer" twice] —> Mexican Milhouse: Que malo. Once again, I must sugar my own churro. —>Kent Brockman: (on TV) "Thanks Mayor Simpson. Because of you, were all taking golden showers! —>[production staff snickers in the background] —>Brockman: What? —>Bart: Aw. Me and Santa's Little Helper used to be a team, but he never wants to play anymore since his bitch moved in. —>Marge: Bart, don't ever say that word again! —>Bart: Well, that's what she is. I looked it up. —>Marge: Well, I'm going to write the dictionary people and have that checked. Feels like a mistake... —>Ned: I'm Dick Tracy! Bam! Take that, Prune-Face! Now I'm Prune-Face! Take that, Dick Tracy! Now I'm Prune Tracy! Take that, Dick— —>Dr. Foster: Stop that, Ned! —>Ned: I'm insisting on a fisting. —>Smithers: What's this about a fisting? —>Homer: Hey, you know, I once knew a man from Nantucket

. —>Bart: And? —>Homer: Let's just say the stories about him are greatly exaggerated. —>Lisa: That story isn't suitable for children! —>Chief Wiggum: Really? I keep my pants on in this version. —>Mr. Burns: Do you see me as a god, Smithers? —>Smithers: Yes, sir! —>Mr. Burns: Would you kneel before me? —>Smithers: (Excitedly) Boy, would I! —>Disco Stu: Move it in, shove it out, Disco Lady, yeah. It's both the suggestive way he sings it and his body language that causes a stir.
Fighteer Lost in Space from The Time Vortex Relationship Status: Dancing with Captain Jack Harkness

Sounds like the show is in a constant war to get as edgy as it can, but it also sounds like the radar is pretty strict with it. A lot of that — implied homosexuality, swearing, and sexual references — would qualify as Parental Bonus more than Radar, though. Probably needs a fine-toothed comb applied, particularly if some of the jokes would work better as other tropes.

For example, we have Something Else Also Rises, so anything that belongs there should go there, not Radar — that trope is specifically for subtle (or not-so-subtle) erection jokes.

I'll see about moving some of the ones I know go into other tropes tonight.