Anime / My Neighbors the Yamadas 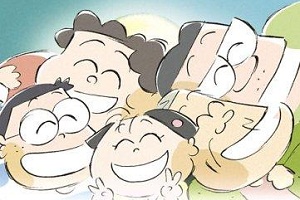 A 1999 Studio Ghibli film directed by Isao Takahata, My Neighbors The Yamadas is based on a popular Japanese newspaper comic about a slightly off-kilter "typical" Japanese family composed of mother Matsuko, father Takashi, grandmother Shige, son Noboru, and daughter Nonoko.

It's an episodic Slice of Life comedy, and a Dom Com. The art has a very loose, caricatured style that is reminiscent of its newspaper comic origins, very different from the lush animation typically found in Studio Ghibli films.

Like most Ghibli films, My Neighbors the Yamadas was dubbed into English by Disney Studios using an all-star cast (headed by Jim Belushi, but don't let that scare you).