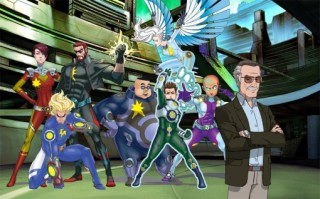 Lee is driving through the Mojave Desert trying to collect his thoughts after a recent story pitch to Archie Comics didn't go so well. While driving, an alien space ship crash lands near him. Inside are two law enforcement officers, the super strong Strong Arm and his flying partner Silver Skylark, along with five intergalactic criminals (who aren't really all that evil); Lazer Lord, who can shoot energy blasts from his hands; Roller Man, who can curl up into a ball like a pill bug and smash enemies; Lady Lightning, who has super fast speed; and brothers Micro, who can shrink in size, and Kid Kinergy, who possesses telekinesis.

The aliens are devastated to be stuck on a backwater planet such as Earth, but Lee, a lifelong comic writer (who's still shopping ideas for a new comic series,) is elated to be meet them. He helps hide them from the U.S. government authorities in exchange for gaining their exclusive marketing rights. And it looks like the aliens arrived just in time, because a race of shapeshifting lizard men called the Taegons have secretly set up shop on Earth and are working to destroy the world's infrastructure in preparation for an invasion.

Based on a a 2012 comic miniseries by PGS Entertainment, the film is the first in a planned trilogy.

The film premiered February 1, 2014 on The Hub Network.