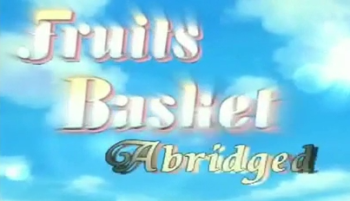 Fruits Basket Abridged is an Abridged Series of the overwhelmingly popular Shōjo series Fruits Basket. It's the brain child of Da Games Elite, written, directed, and edited by him. The characters are all voiced by his friends and associates, having premiered on New Years Eve, 2011. From the beginning, they have insisted every episode is already recorded and finished, implying it will complete its 26 episode run on an episode a week schedule.

Like most series, it's an Affectionate Parody, but at many points, it employs some dramatic elements, and even, by Word of God, elements of Deconstruction.

. In order to maintain the series in the event of the channel being taken down, a Blip channel simultaneously uploads the vids.

Apparently, the movie D-War was based on real events...