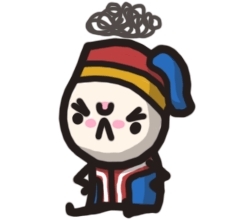 Hárri, the Sámi reformer
It’s a webcomic about things, but mainly videogames. BUT! The chapel isn’t your average badly drawn comic about video games, it has been hand crafted by Ryan Dixon (AKA. Fatherlorris) deep within the Welsh countryside. The chapel is also low fat and free of all artificial sweeteners so you can consume it all day and guilt free!
— ''What is The Chapel?

Has a Patreon page