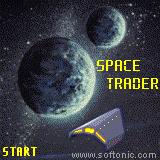 ) is a freeware game for Palm OS devices. It is compatible with Palm OS 2.0 and highernote but full greyscale and color support only work on 3.5 and higher. The game should work even on "Garnet" versions; OS 5.4.2.. The game was initially released in 2002, with its most recent version being released in December 2005. It has since been ported to the Pocket PC, a native Windows program

, and iOS and Android (the latter being retitled ''Dark Nova''

), as well as more vanilla Android

The game is based off of the fairly-popular Elite and Solar Warsnote which, in turn, was based on Dope Wars. Space Trader itself became quite popular as far as freeware Palm OS games went, and it is commonly cited as one of the OS's best.

The game itself focuses on buying and selling goods between multiple planet-like "systems", with the ultimate goal of eventually purchasing a moon and retiring there. The player can choose to be a perfectly benign trader (perhaps bounty hunting on the side), or walk the path of piracy and plunder less capable traders (or somewhere in between) while dealing with the police.

The developer (Pieter Spronck) was writing a sequel at one point, called Picoverse, but unfortunately it has fallen off the map.