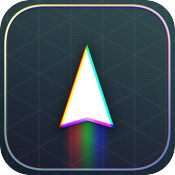 Data Wing is a freeware game for iOS and Android, created by Dan Vogt

. Released on August 16, 2017, the game is something of a mashup of Asteroids (controls and physics) and 2D racing games. If that sounds basic, worry not.

As the player progresses, it becomes clear that they play as a data carrier inside a young girl's smartphone. Through their tasks for an AI known as Mother, they can access normally-blocked documents that detail her life. Through them, perhaps the "DATA WING" can uncover a higher purpose ...

The game is available here (iOS)

Triangle-san! Would you set your payload to these tropes for me?