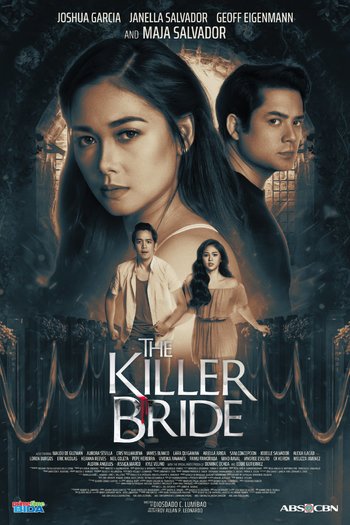 The Killer Bride is a 2019 Philippine drama television series starring Maja Salvador in the title role, alongside Janella Salvador, Joshua Garcia, Geoff Eigenmann, and a generally pretty star-studded Ensemble Cast. The series aired on ABS-CBN's Primetime Bida evening block and worldwide on The Filipino Channel from August 12, 2019 to January 17, 2020.

Naïve Everygirl Emma Bonaobra (Janella Salvador) moves from bustling Manila to Las Espadas, inexplicably drawn to the sleepy and superstitious town. While working as a mortuary cosmetologist at a funeral home, she learns her purpose in Las Espadas the hard way: she gets violently possessed by the ghost of Camila dela Torre (Maja Salvador). Dubbed the Killer Bride after being framed for the murder of her brother-in-law on her wedding day, Camila vowed to make her tormentors pay as she died in a prison fire.

BEWARE OF SPOILERS. The Killer Bride is a heavily serialized show with a complex mystery at its heart.

Tropes found in The Killer Bride: