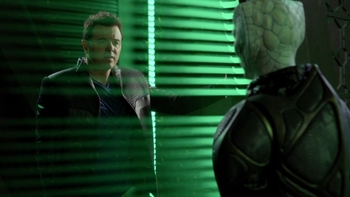 You wanna talk "bad date" stories; Ed's is gonna be hard to beat.
Ed is stranded on a planet with a Krill, and is forced to deal with Krill fanaticism and a terrible secret. Meanwhile, Gordon, in the midst of a crisis of confidence, decides he wants to take the command test.