Recap / The Orville S1E04 "If the Stars Should Appear" 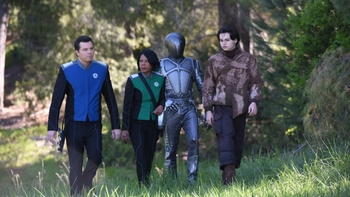 Mercer, Finn, and Isaac enjoying a nice stroll aboard the generational ship.

The Orville encounters a massive generation ship which is adrift and on course for a star. When they board the ship in an attempt to offer aid to the inhabitants, they discover that no one aboard is aware that they are on a ship, and the local leadership is invested in keeping things that way.