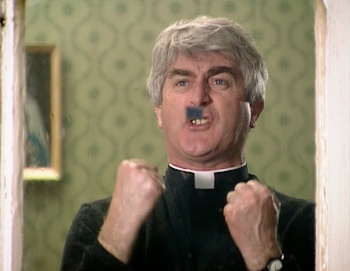 Ein Volk, Ein Reich, Ein Perfectly Square Bit of Dirt on the Window.
After winning the Golden Cleric in the previous episode, Ted is seemingly reaping the benefits, having been moved to a cushy parish in Dublin, performing church work in Paris, with good food, intelligent company and beautiful surroundings. Unfortunately, the parish accountant notices some discrepancies in Ted's 'expenses'...and he finds himself swiftly banished back to Craggy Island.
Advertisement:

After settling in back at the parochial house, Ted finds in his absence Jack has become agoraphobic and following a series of falls, Mrs. Doyle is pretty much crippled and incapable of cleaning the house. After a stupid joke of Ted's results in him being branded a racist by the island's (suprisingly sizeable) Chinese community, Ted finds his efforts to clear his name being thwarted by the decrepit condition of the parochial house and the antics of a fellow priest with some unwholesome interests.