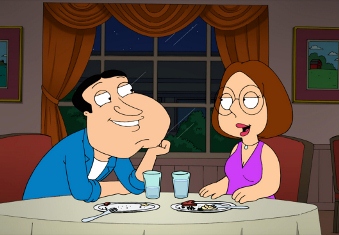 After a violent night at the Teen Choice Awards and the deterioration of plans for Meg's 18th birthday, Meg finds solace in Quagmire, who uses this opportunity to finally nail Meg (as he has been waiting to do it since at least the pre-cancellation episodes), and the Griffins (who usually don't give a crap about Meg) stand up and keep Quagmire from taking advantage of Meg.

"Meg And Quagmire" contains examples of: