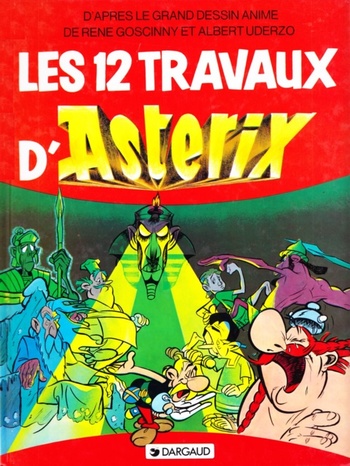 The comic book adaptation of The Twelve Tasks of Asterix.

The constant defeats of the Roman Legions against the indomitable Gaulish village has got people in Rome suspecting that the Gauls are actually Gods. Doubting this himself, Caesar heads to the village and offers them a challenge: He will give them twelve tasks which they must complete to prove their divinity. If they succeed, Rome will surrender to them. If they fail even a single task, the village must surrender to Rome. After some discussion, Vitalstatistix chooses Asterix and Obelix to be the village's representatives in the twelve challenges:

Asterix and Obelix complete each of the first eleven challenges, then join the rest of the villagers to complete the last. In the end, Caesar is forced to admit defeat, surrendering his laurel wreath to Vitalstatistix.

As the village celebrates its great victory, Obelix asks Asterix if they're really the rulers of Rome. Asterix replies "This is just a cartoon film, and anything goes."