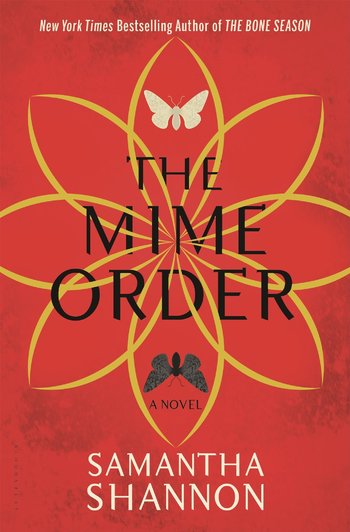 Being a true and faithful Account of the ghastly Puppet Masters behind Scion, and their Harvest of clairvoyant Peoples
For are we not vastly superior to them, we unnaturals? For though we pick the bones of society, though we crawl in gutters and beg for our keep, we are living conduits to the world beyond. We are proof of an auxiliary existence. We are catalysts of the ultimate energy, the eternal æther. We harness Death itself. We unhorse the Reaper.
— An Obscure Writer, On the Merits of Unnaturalness
Advertisement:

The Mime Order is the 2015 sequel to Samantha Shannon's The Bone Season, and the second book in a series of seven installments. Set in a Dystopian, Alternate History England, the story follows a young clairvoyant woman named Paige Mahoney. Since 1859, when the phenomenon of clairvoyance first became public knowledge, England has operated under an oppressive and strongly anti-voyant government called Scion. Paige belongs to a class of criminal voyants who use their contact with spirits and the spirit world (known as the æther) to make a living while avoiding the authorities. She is a rare kind of voyant known as a dreamwalker, capable of separating her spirit from her physical body and entering the æther in spirit form.

Paige has escaped from the penal colony of Sheol I and returned to London. She can't forget what she learned in Oxford: that Scion is a puppet government controlled by the Rephaim, a race of supernatural creatures whose aim is to colonize the human world. Her only hope is the syndicate, an organized underground society of clairvoyants presided over by the Unnatural Assembly. If she can rouse them out of their petty disputes and backstage murders, they could start to fight back against the empire that's been systematically destroying voyants for two hundred years.

But Paige is public enemy number one and the most-wanted person in the citadel. If she wants to stay alive and out of Scion's clutches, she'll have to seek the protection of her old mime-lord, Jaxon Hall — a man who has no intention of letting her act independently of his wishes.

If you're looking for one of the other books in the series, see the links below:

To return to the general page for the Bone Season series, click here.

For character-specific tropes, please go to the character page for this series.

"And words, my walker — well, words are everything. Words give wings even to those who have been stamped upon, broken beyond all hope of repair."
— Jaxon Hall