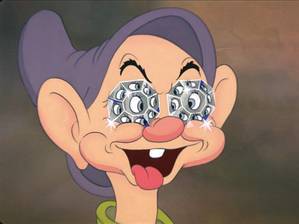 Dopey is a man (well, dwarf) of few words, but many expressions.