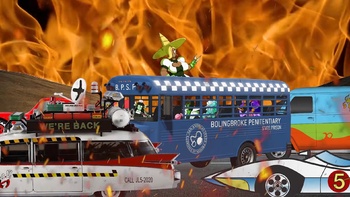 Crafty: "Relax, everyone! I think it's good that she still has some fight in her!"
Nurse: "But if she keeps beating up the other drivers, that won't help the traffic move any faster..."
Advertisement:
open/close all folders
Season 4 Premiere Month

Main Show 79. - "Is That a Castlevania Reference?"