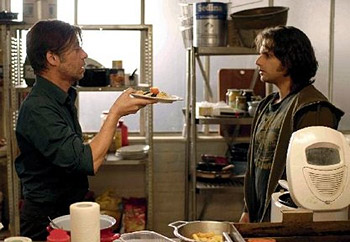 Soul Kitchen is a German music comedy movie directed by Fatih Akın which premiered in German cinemas around Christmas 2009.

The main character around whom the entiry story builds up is Zinos (Adam Bousdoukos), a young man with Greek background who runs a restaurant named Soul Kitchen in an old warehouse somewhere in Hamburg-Wilhelmsburg. The food isn't overly good but decent, and the customers aren't overly many but faithful. Things start to get out of hand with a few incidents. Zinos' girlfriend Nadine (Pheline Roggan) goes to Shanghai for her work as a journalist and wants him to follow which he can't, at least not immediately. His brother Illias (Moritz Bleibtreu) comes out of jail for a few hours a day but has to take a job during that time, and he asks Zinos to pretend to give him one. An old schoolmate of him, Neumann (Wotan Wilke Möhring), now a real estate property shark, gets interested in the land the Soul Kitchen is standing on and tries to acquire it to have it demolished and resell the vacant land.

Zinos himself seriously hurts his back trying to get the ancient Greek-made dish-washer out of his kitchen after it breaks almost all his dishes. Since he can't stand in the kitchen anymore, he hires the excentric Supreme Chef Shayn (Birol Ünel) who has just been fired from a luxurious restaurant. Shayn refuses to make the meals on Zinos' menu, stating that his customers have been shoveling junk into themselves all the time. He spruces up the food, and if the band who uses the Soul Kitchen as their temporary rehearsal room doesn't chase the customers away, it's Shayn and his cooking, right when Zinos needs money to pay the city (whose representatives take his stereo instead) and upgrade the kitchen to satisfy the health office who had been called in one of Neumann's schemes.

Then a musical school opens up in a nearby house. Since the Soul Kitchen is the only gastronomy around, the students come to have their meals and hang out there; they even seem to find Shayn's creations to their liking. The real success kicks in when Illias installs a DJ set his buddies have just robbed out of a discoteque from a DJ who has called him names. Illias has no clue how to operate it but learns quickly, and once the visitors can dance to cool soul music from Zinos' record collection (and the occasional performance by the rock band which had rehearsed there before), the Soul Kitchen becomes a huge success. Nevertheless, Neumann doesn't give up, nor does Zinos' fate which keeps acting against him.

Soul Kitchen was the first movie Fatih Akın shot completely in Germany which made it more expensive than any of his previous movies. It takes place entirely in the city of Hamburg, largely in gentrification-threatened areas in Wilhelmsburg. Akın referred to it as a "declaration of love to Hamburg and its inhabitants" and actually showcases the city with its many facets.