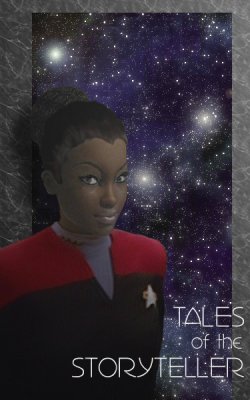 Have I got a story to tell you...
Honesty was extremely important to him [Sutek]. It went without saying that he expected it from us, especially in the little things. The little things didn't matter all that much to us, though. We just kept our heads down and prayed to whatever deity or deities we revered to get us out of this command. The first one of us that wasn't sloppy (wasn't dishonest) with the details would get his full attention. And boy, did I get it.

Tales of the Storyteller

is a Star Trek fanfiction series written by Intrepid Sovereign, centered around Sydney Satterwhite (at the right), a Starfleet officer serving in the late 24th century. Many stories are told by Sydney herself through log entries, from her stint as a lowly Ensign, to her service aboard an infamous starship under a demanding captain, to her assignment as captain of her own ship, the USS Adirondack.

The stories are set in the pre-Next Generation years to, currently, the early Deep Space Nine era. Character-driven, with some mystery, tragedy, humor, and adventure. They try to adhere to canon, but it's mostly used as background information and history. OCs dominate.

Notable stories in the series: