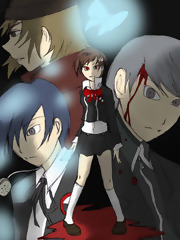 is a fanfic written by Sea of Soul with help from Ohta-Suzuke. It's a crossover of Persona 4 and Persona 3.

Taking place several months after the events of Persona 4, Souji Seta, now living in Port Island, finds himself without parents after ending up in a car crash. Mere moments after being discharged from the hospital, the Dark Hour suddenly occurs in the middle of the day. During this, Souji encounters two boys that are supposed to be dead... his old childhood friend, Minato Arisato, and Shinjiro Aragaki.

Now, the Investigation Team and SEES must team up to find out why the Dark Hour has returned and stop it.

But what does a mysterious girl with brown hair and red eyes have to do with it?