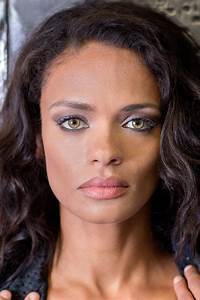 Candice 'Kandyse' McClure (born March 22, 1980 in Durban, South Africa) is a South African-born Canadian actress best known for her roles on Battlestar Galactica (2003) and Hemlock Grove. She comes from the Cape Coloured (mixed race people of Black African, European and Malay ancestry) group in her native South Africa. Her father is White, her mother Black, and Afrikaans was her first language while growing up. McClure says her family left as a result of her mother's efforts against apartheid causing dire threats from the government, and Canada granted them political asylum (she later became a Canadian citizen). McClure is also likely most notable physically for her pale, striking eyes.
Advertisement:

She is married to musician Cylenz.