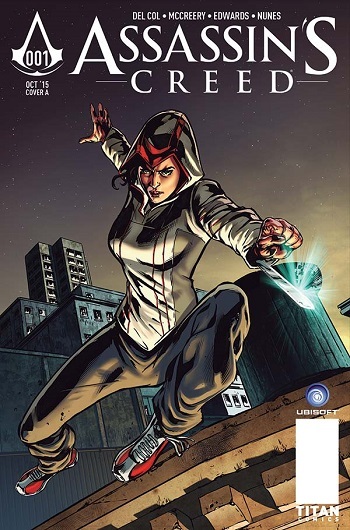 Assassin's Creed is a comic series set in the Assassin's Creed universe. Published by Titan Comics, the first issue was released in October 2015. It ended after fourteen issues, when it was replaced by Assassin's Creed: Uprising, which continued its storyline and themes.

The series follows Charlotte de la Cruz, a young woman living in San Diego who discovers the ongoing war between the Assassin Brotherhood and the Templars. After being recruited by the Assassins, she is tasked with exploring the memories of her ancestor Tom Stoddard, a ruthless Assassin who specializes in hunting Pieces of Eden and was present the witch trials in Salem, Massachusetts. There, she must discover whether or not a Piece of Eden was present, which will provide evidence of the trustworthiness of Joseph, a modern day Assassin thought dead who in now in Templar custody but is claiming to be luring a top Templar into a trap.

The second arc continues Charlotte's story as she explores the memories of a ancestor in the Inca Empire, while she and her fellow Assassins try simply surviving on the run in Mexico.

The third and final arc has Charlotte delve into the memories of Tom's ancestor, Hiram, in the mid- Renaissance, as she contends with family issues and the Templars closing in.