Character page for the webcomic Saint For Rent. 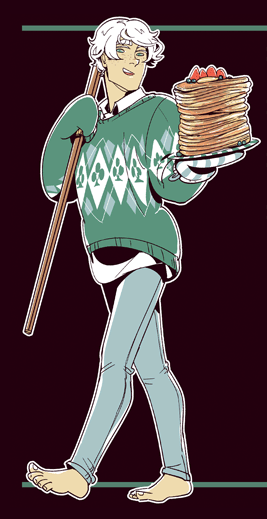 "It's not much, but it's a home."
The innkeeper for the Cloverhouse Inn. Left behind with the Inn and his father's cane, Saint aspires to create a clean and comfortable home for time travelers . Unfortunately for him, his life is destined to be strange even by the standards of innkeepers, and at least part of that seems to be his father's doing. 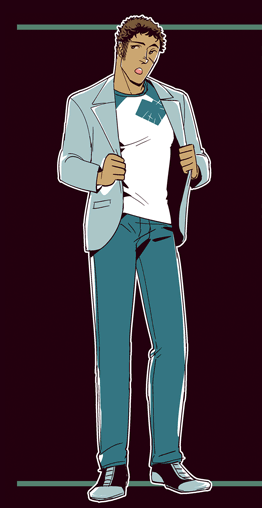 "So do I go on amazing adventures, too...? I'll believe anything, if I can believe that."
An Argentine time traveler, frequenter of the Cloverhouse and Saint's best friend. Five versions of Armand, each at a different age, are in the story, often in the same scene. Subsequently, he is the center of many stable time loops and general time travel confusion.
Kitty 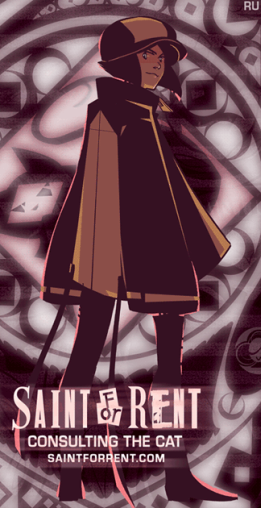 "I don't want to hitchhike forever."
A mysterious girl(?) with a mysterious past. As a hitchhiker, she piggybacks off of the visas of other travelers. She ends up at the Cloverhouse by accident and quickly becomes a new resident, permanently tangling herself up in the Cloverhouse's drama.
Patrick 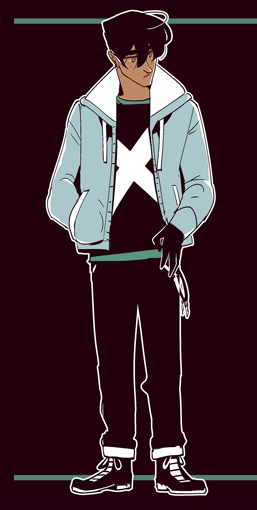 "Maybe I should have slowed down."
Saint's beloved younger brother. His childhood consisted of bouncing around from inn to inn, and his adult life seems to be following the same path. Patrick has a complicated past with most of the characters, which tends to throw a wrench in his plans.

"Innkeeping is a thankless job, Saint. I don't recommend going back to it."
The innkeeper of the upscale Helen. Kanon is efficient, punctual, and orderly. In addition to his duties as an innkeeper, he runs a contact network between various inns at different points in time. Possessing a dry sense of humor and a sharp wit, he remembers everyone who passes through the left-hand elevator doors.
Mei

"Can you... make it so nobody's ever timelagged around me?"
Kanon's daughter. One of the first people Armand met when he began time traveling, she has grown up in the world of the travelers due to her upbringing in the Helen. She aspires to be one one day against her father's wishes, and gets her wish when she teaches Armand how to travel.

Denizens of the Timestream

"Tell me human, what do you think time travel is?"
A being who originated in the Timestream. She's something of a bureaucrat, as she is the one who issues time travel visas for humans. Her work was interrupted when Patrick began notarizing his own visas, forcing her to track him down. Her personality is no nonsense, but fairly lenient compared to her colleague, the Counter.
The Counter / Casimir

"Nice try, but you'll find me correct, punctual, and inescapable."
A being who originated in the Timestream. He tracks and manages timelines, but lacks the power to manipulate timelines directly. He apparently rarely does field work, as the Consultant notes, and has only helped others when it has benefited the Timestream.

"I am a nation of me."
President of the United States in the year 2500. Her husband, Casimir, is taken by the Counter in the events of Travel Log 2, and she follows after him, and ends up in Nowhere, where the Consultant gives her a visa. Wanting to find her husband, the Consultant takes her to the Cloverhouse Inn, and ends up going to the Helen Hotel with Saint.
Casimir Demort

The First Gentleman of the United States in the year 2500. A physicist working on the world's first time machine, he was mysteriously taken away by the Counter, who now occasionally uses his form to appear to others.

Patrick's friend, who he's known since he was a baby.
Anita