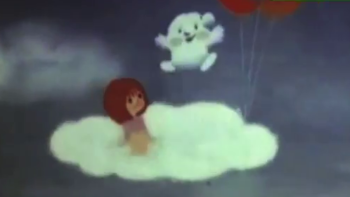 The famous scene of Guda-Guda and the girl on a cloud.
"Look at those rainbows, so many colors, let's have fun together!"
—The girl singing the first verse of Rainbows.
Advertisement:

Me Cvimad Moval/მე წვიმად მოვალ (Georgian for "I Will Return as the Rainclouds") is a Georgian animated musical short directed by Givi Kasradze, released in 1986.

The short starts in the beginnings of winter in rural Georgia. Born from a avalanche in the lonely mountains with nothing else but a raven to play with, Guda-Guda the snowman finds himself with nothing but a love for music to keep himself company.

While playing icicles to pass the time, he is accompanied by a distant song from below and notices a singing girl. After accidentally falling down to a messy introduction, Guda-Guda and the girl form a friendship with their love of music, flowers, and bubbles. The two go on many adventures in their environment, with nothing but fun to be had.

The short was made during Soviet-era Georgia and distributed by the company Georgian Film Studio, then known as "Kartuli-Pilmi".

It was later released in Russia and other USSR states under a different dub. In the coming decades in its home country, the short has since become popular among the Georgian public leading to the creation of a remake under the name Tovlis-Gunda (Georgian for "snowman") with a contemporary setting in 2018.

and the Russian dub here

I Will Return as the Rainclouds provides examples of:

The remake, Tovlis-Gunda, provides examples of:

I am now part of the sky...
It flew me away from you.
Remember me?
Gap, gap, gap, gap
I have now become the rain.