Webcomic / Abide in the Wind

"One day, there began the story of a girl who faced the last dragon on earth." 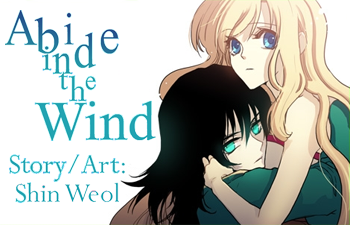 Abide in the Wind is an ongoing fantasy webtoon by Shin Weol. It can be read it its original Korean form here

One day, 18-year-old craftsman apprentice Reana Forte encounters a wounded creature in the wilderness. When she approaches it, a disembodied voice tells her that this creature is Dragon Lord Kairak, who has been mortally wounded but can be saved using a little bit of her help. She agrees to heal him but in the process the dragon pearl - the source of a dragon's power and life force - embeds itself in her body. Since the dragon cannot part with the dragon pearl, the voice she heard, the spirit guide Didan, requests that she lets them live with her for a year until Kairak, who takes on the form of a beautiful boy, fully matures and can reclaim the dragon pearl.

Abide in the Wind contains examples of: