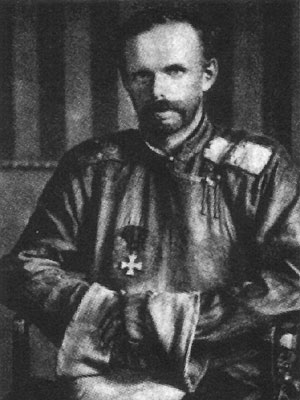 Some famous people get their own TV Tropes page for being great scientists or politicians. Others for their military skill or artistry. A few get it for simply being so batshit insane that they can't be ignored. Guess which category Baron Ungern-Sternberg falls under?

Going by the full name of Roman (Robert) Fyodorovich von Ungern-Sternberg (born Robert Nikolaus Maximilian Freiherr von Ungern-Sternberg, 10 January 1886 [29 December 1885 in the Old Style calendar] – 15 September 1921) (usually shortened to Roman von Ungern-Sternberg or just Ungern), this blood-soaked Russian warlord seems like a character from a pulp novel, but to his victims he was all too real. Born to a family of Baltic German nobles (these families formed the backbone of the Tsarist state), Ungern relished the ideals of absolute monarchy and feudalism. As Russia was modernized in leaps and bounds, Ungern delved ever more deeply into right-wing extremism and ancient mysticism. A most unorthodox Orthodox Christian, he also absorbed (and horribly misinterpreted) several Buddhist ideals, and showed a general fascination with East Asia.

Ungern wasn't a bully in school, but rather one of the kids that scared even the bullies. He did badly in the military academy, too spoiled and unstable to handle discipline. He jumped at the chance to fight the Japanese during the Russo-Japanese War, but most of the conflict ended before he could get there. The seriousness of the situation did serve to drum at least a little bit of discipline into him, and Ungern, for all his Russian pride, admired the skill and courage of the Imperial Japanese Army.

At the end of the war, he went back west where he was both horrified by the democratic reforms occurring in the Russian government, and fascinated by new strains of mysticism (including a particularly rabid Anti-Semitism). He eventually joined the Transbaikal Cossack Host. The hard-riding Cossacks were rightly feared for their ferocity, and Ungern found himself right at home. As a man whose soul was fundamentally medieval, he had never really fit in with the increasingly gentrified Russian officer corps. Still, the Cossack life could not offer the excitement Ungern craved. During this time, he got his first glimpse of Mongolia, and was enchanted by its antiquity and militant brand of Buddhism.

Ungern finally got his chance to fight during World War I, where accounts describe him fearlessly leading charges into No Man's Land and conducting behind-the-lines guerilla operations against the Austrians. Though lacking much in the way of admirable traits, Ungern was at least brave, almost suicidally so. For Russia, that war ended in the October Revolution, which eventually turned into the horrific Russian Civil War.

Given his reactionary personality and political views, it's no surprise that Ungern joined the Whites, who were mainly defined by their opposition to the Bolshevik Reds. Most of the battles were fought in the icy abattoirs of Siberia, atrocities piling up on both sides. Wolves grew fat on human flesh while bandit soldiers terrorized the countryside in armored trains. He was eventually put in charge of Dauria, a remote spot on the Manchurian-Russian border. He ruled absolutely and with horrific violence—Jews were singled out for special brutality. The fact that Dauria doubled as an execution camp for Red prisoners served as another outlet for Ungern's violence. Even among a bunch as cruel as the White leaders, Ungern achieved a reputation for legendary sadism. Unlike the other Whites, he was an ascetic, and lived in the same conditions as his men. This was one of the reasons his soldiers stayed loyal to him in spite of his barbarity and obvious insanity. At this time, Ungern also took up an interest in fortune telling and opium smoking.

Perhaps seeing that the Whites were doomed, he led his cavalry forces into Mongolia. There he planned to create a new Mongol Horde, and use it to conquer Russia and usher in a new age of apocalyptic glory. At the time, Mongolia was a mess, reeling from the fallout of the Russian Civil War, as well as an invasion from China. The Chinese had thrown out Mongolia's previous theocratic ruler, Bogd Khan (who was also considered a bodhisattva). The Mongols didn't like the Chinese (or Russians) very much. Ungern exploited the Mongol tensions and beliefs to conquer the region with his half-starved army of looters. He took the capital city by setting fires in the hills surrounding it, making his force seem much bigger than it actually was. This bluff crippled the already frightened Chinese garrison. After this, he was declared a khan with the approval of the Bogd Khan, who was probably wondering what he'd gotten himself into at this point.

Ungern's tenure as warlord of Mongolia is notable mostly for its cruelty. He'd taken to dressing up in traditional Mongol clothes and relying on soothsayers. Seeing Red spies and Jews behind every door, he began a horrific purge, all the while savoring his lunatic fantasies of a great Pan-Asian empire. This was an unlikely prospect for many reasons, not the least of which was Ungern's complete failure to understand logistics. He never even had a clear idea as to the size of his army (which was funded by loot). The Soviets, seeing an opportunity to spread revolution, attacked Mongolia in 1921, defeating Ungern and setting up a Communist government in Mongolia. In retaliation, Ungern attacked Soviet territories until finally being handed over to the Reds by his own officers. After a show trial, he was shot by firing squad on September 15, 1921.

Note: Most of the information on this page was taken from The Bloody White Baron, a history book about Ungern-Sternberg written by James Palmer. A chapter about him can be found in Setting the East Ablaze by Peter Hopkirk, which describes him roughly the same way. An article about him here

Both Hopkirk and Palmer draw heavily on Ferdinand Ossendowski's 1922 memoir Beast, Men and Gods. Ossendowski was a Polish scientist and engineer who served for a time as Ungern's political advisor after fleeing from the revolutionary terror. It can be read online here