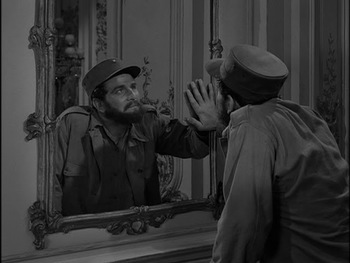 "The enemy is always the last person they expect..."
Rod Serling: This is the face of Ramos Clemente, a year ago a beardless, nameless worker of the dirt who plodded behind a mule, furrowing someone else's land. And he looked up at a hot Central American sun and he pledged the impossible. He made a vow that he would lead an avenging army against the tyranny that put the ache in his back and the anguish in his eyes, and now one year later the dream of the impossible has become a fact. In just a moment we will look deep into this mirror and see the aftermath of a rebellion in the Twilight Zone.
Advertisement:

In an unnamed Central American nation, the now-General Clemente (Peter Falk) and his four lifelong friends D'Alessandro, Garcia, Tabal, and Cristo successfully overthrow the decade-long dictatorship of General De Cruz in an armed revolution, making them the new rulers. Before he is dragged away to prison, De Cruz warns Clemente that he will soon learn the consequences of ruling by force. Pointing to a mirror in his office, he tells him that it will show whoever owns it future assassination plots against them, and that Clemente will begin to see enemies everywhere.

Though the five rule well in their first days in power, Clemente receives objections from the other four after his controversial decision to summarily execute the prisoners whom he has declared enemies of the state. Garcia, Tabal, and Cristo leave the room one night. Looking in the mirror, Clemente sees D'Alessandro aiming at him with a rifle. Despite his protests that it's just an illusion, Clemente kills him by throwing him from the balcony of the dictator's mansion. The three remaining are horrified but do nothing. Looking in the mirror again a few days later, Clemente sees Garcia and Tabal coming at him with knives. He orders them to go check on whether De Cruz is being guarded well at the jail before calling the guards and telling them to shoot the two men when they arrive.

Cristo tries to talk sense into Clemente by telling him the mirror is evil, but to no avail. Looking into the mirror, Clemente sees Cristo supposedly offering him a poisoned glass of wine. Cristo attempts to make Clemente see reason, but ultimately he's shot to death by Clemente. That night, Clemente is visited by a priest, Father Tomas, who pleads with him to stop the mass executions. Clemente refuses. Father Tomas tells him that leaders in power have only one real enemy, whom they never recognize until it's too late, then departs. Paranoid and isolated, Clemente looks into the mirror and sees only himself. He throws his pistol at the mirror, shattering it completely.

Outside the office, Father Tomas hears a gunshot. Rushing inside, he sees that Clemente has committed suicide. He sadly tells the attending guard that the only real enemy that rulers have are themselves.

Advertisement:
Rod Serling: Ramos Clemente, a would-be god in dungarees, strangled by an illusion, that will-o'-the-wisp mirage that dangles from the sky in front of the eyes of all ambitious men, all tyrants—and any resemblance to tyrants living or dead is hardly coincidental, whether it be here or in the Twilight Zone.