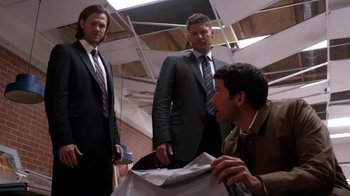 Castiel This attack... I knew he wanted a war, but this...This is abhorrent, even for him.
Written by Andrew Dabb.

Castiel tries to lead his army to fight Metatron and some angels committing suicide in his name. Dean, on the other hand, seems to be embracing his growing desire for violence courtesy of the Mark of Cain and the First Blade.