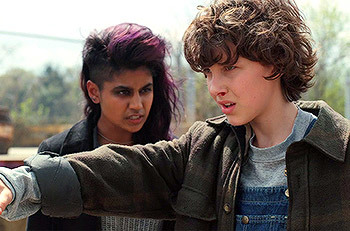 In Chicago, Eleven locates Kali, who is the girl from Terry's memories. Kali can create illusions, and she leads a gang of outcasts who exact revenge on those who have hurt them. She teaches Eleven to channel her anger towards stronger powers.

Eleven uses her powers to find Ray, the lab technician who performed shock therapy on Terry, and the gang breaks into his apartment. Ray claims Brenner is still alive, and he offers to lead Kali and Eleven to Brenner. They disbelieve him, and Kali tries to coax Eleven into killing Ray. When Eleven learns he has two daughters, she stops and prevents Kali from killing him.

Back at their hideout, Kali conjures a disturbing vision of Brenner and demands that Eleven avenge their mother. Eleven visualizes Mike and Hopper and realizes they are in trouble. While Kali and her gang escape the police, Eleven returns to Hawkins.