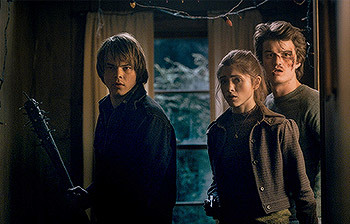 Being interrogated at Hawkins Lab, Hopper manages to negotiate a deal with Brenner. He gives up the location of Eleven; in exchange him and Joyce are allowed to enter the Upside Down to attempt to save Will. They find Will unconscious in the Upside-Down town library. They pull a tendril out of his throat, perform CPR, and revive him.

Nancy and Jonathan booby-trap the Byerses' home, then cut their hands to attract the monster with their blood. Steve arrives, intending to apologize to Jonathan about their fight, but the monster attacks. The monster springs the trap but escapes back to the Upside Down. Eleven and the boys hide in the middle school.

Mike asks Eleven to a school dance, the Snow Ball, and kisses her. The military storms the school to re-capture Eleven, but she kills them, before collapsing from the strain afterwards. As Brenner cradles her, the monster attacks, apparently killing him. The boys hide Eleven in a classroom. The monster corners them, but Eleven pins it against a wall. She says goodbye to Mike, disintegrates the monster, and vanishes.

Will is hospitalized and reunited with his mother, brother, and friends. Happy that all seems well, Hopper steps outside the hospital for a smoke, but as he does so, a black car pulls up to him and two government agents step out, beckoning him to enter the car. Reluctantly, he enters it and is driven off.

One month later, at Christmas time, Nancy and Steve are back together, and both are friends with Jonathan. Hopper is seen leaving Eggo waffles and other food in a box in the woods. At the Byerses' household, Will excuses himself from the Christmas dinner to go to the bathroom. There he coughs up a slug-like creature into the sink and has a vision of the world as the Upside Down, but he hides this from his family.