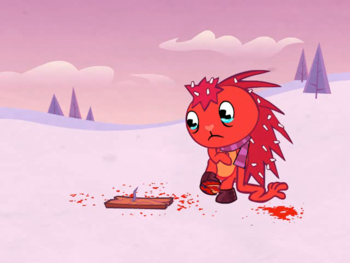 Flaky can't ski why this is so fun.

After Disco Bear accidentally bumped Flaky causing her to get caught on a ski lift, Flaky must face her fears and ski down a mountain when she gets stranded at the top. As in, she ends up suffering from a foot stuck on a nail on a board, outstretched arm, an avalanche going after her, and another foot also getting stuck, only this time for another chance at survival. She eventually crashes through a chain link fence surrounding a cabin. Disco Bear opens the cabin door, showing Flaky shortly before she breaks into numerous little pieces. The cabin is finally hit by the avalanche, covering everything in snow. Disco Bear pops out seemingly fine, only for the board that Flaky was riding on to hit him in the face.

"Ski Ya, Wouldn't Wanna Be Ya!" contains examples of: