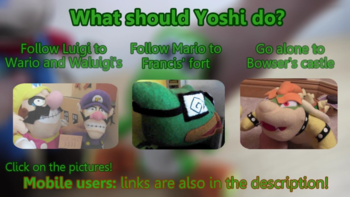 How will Yoshi find the egg? YOU decide!.
Advertisement:

This is not your typical Goomzilla video. Rather, it's a set of videos set into one Gamebook story. Instead of Goomzilla resolving the conflict, the outcome is in your hands.

One day on Yoshi's Island, the Yoshi clan is guarding an egg, presumably the next Yoshi to be born. But that night, a mysterious hooded figure crept onto the island and stole the egg while the other Yoshis were sleeping. Yoshi vows to retrieve the stolen egg.

When he alerts the news to the Mario Bros., all three of them have their own theories of a possible culprit. Luigi thinks it's Wario and Waluigi, Mario thinks it's Francis, and Yoshi thinks it's Bowser. Which one of these is correct? That's for you to find out.

How this is set up is Goomzilla has made multiple videos showing all the possible branches and endings of this adventure, but with the obvious exception of the prologue, they're all locked videos. Viewing them requires selecting the choices from the end of the branches or the video descriptions...or just giving up and checking out the playlist for all of the possible routes.

There are seven different endings. However good or bad the ending you reach is depends on how many Yoshi cookies out of ten you receive. Can you receive the best ending on your first try? Your journey begins here

You can also view the trailer here

, and the Hilarious Outtakes here

Beware of unmarked spoilers in the listed tropes!!!

Tropes applying to Yoshi and the Lost Egg:

Ending Rating:
0 out of 10 Yoshi Cookies!
You allowed TV Tropes to ruin your life! This is a disaster! You've found the worst ending!