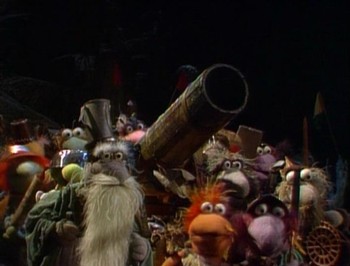 While the Cave Fraggles are preparing their own weapons for war, Mokey befriends Beige, one of her captors. That night, while the other Fraggles are asleep, Red sneaks over to Mokey's cage and meets Beige. They agree that they both want to free Mokey and prevent any fighting. Before any weapons can be fired, Red hits the World's Oldest Fraggle in the face with a pie. Beige does the same to the Cave's Oldest Fraggle, and soon both groups of Fraggles are laughing. War is averted, and Mokey is freed.