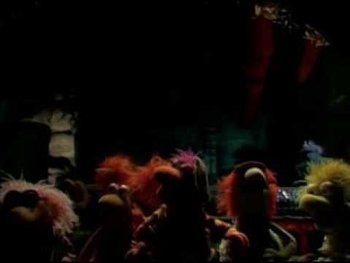 Who forgot to pay the electric bill?
Chosen to write the Glory Song, Gobo accidentally convinces everyone to stop singing so he can concentrate. Within hours, all the light in the Rock goes out. The Ditzies, the source of this light, appear and introduce themselves to the Fraggles. The Ditzies are dying and don't know why. They beg the Fraggles to help them.

Gobo and Wembley decide to ask the advice of the World's Oldest Fraggle, but he's fallen asleep and won't wake up. To Gobo's horror, he realizes the same thing is happening to the other Fraggles. When he and Wembley are the only ones left awake, they go to see the Trash Heap, who says to "do what Fraggles always do." Not understanding, they decide to move the other Fraggles to the Gorgs' garden so the daylight will revive them—but on getting back to the Rock, Wembley falls asleep as well. Distraught, Gobo begins to sing. The song not only revives the Ditzies but turns out to be the Glory Song. The other Fraggles wake up, joining in the song, and Gobo realizes it's their music that keeps the Ditzies alive.