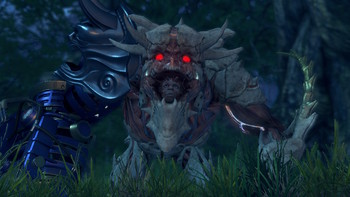 This is what happens if you fuse a Blade with a human, kids.
Advertisement:

Despite being Lighter and Softer than previous Xeno series games, Xenoblade Chronicles 2 is still at it when it comes to including content that makes the ESRB's T rating dubious at best.

All spoilers are unmarked, proceed with caution.