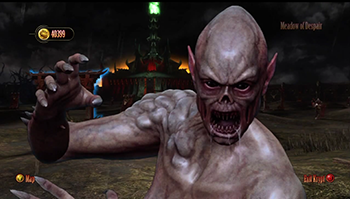 She just wanted to say hi.

When Ed Boon said that this would be the bloodiest MK game of the series, he wasn't making stuff up. What he didn't tell us is that most of it would give us horrible nightmares.

Warning: As per Nightmare Fuel guidelines, all spoilers below are unmarked.