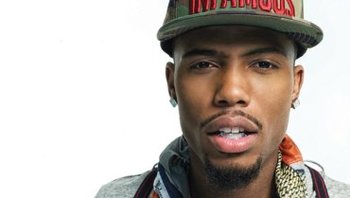 He's got the magic in him.
Advertisement:

B.o.B decided to drop out of school in ninth grade in attempt to pursue a music career, but he wasn't signed to a record label until later in 2006 when he was discovered by American record producer Jim Jonsin, who would later sign him to his label Rebel Rock Entertainment. Two years later, he signed a joint venture with Atlantic Records and T.I.'s Grand Hustle Records.

In 2007, he released his debut single via Atlantic, "Haterz Everywhere", which peaked at #5 on the Bubbling Under Hot 100 Singles chart.

In 2010, his first mainstream hit, "Nothin' On You" (featuring Bruno Mars, who would also breakthrough thanks to his appearance on the song) reached #1 on the Billboard Hot 100, thus being his highest-peaking hit of all time. He then released his debut studio album B.o.B Presents: The Adventures of Bobby Ray. The album debuted at #1 on the Billboard 200 and quickly managed to sell 84,000 copies upon its release. The album also produced his follow-up hits "Airplanes" (featuring Hayley Williams of Paramore) and "Magic" (featuring Weezer frontman Rivers Cuomo). The former remains his second best-known hit of all time, peaking at #2, while the latter peaked at #10.

B.o.B's examples of the following tropes: